The Tula Cartridge Works, founded in 1880, is one of the most significant world producers of small-arms ammunition. Unique and exceptional production traditions lasting for more than 125 years, ability to apply the up-to-date scientific and research knowledge, close connection of development and production and active commercial policy - all these are attributes of a stable, perspective and dynamic company.

The cartridge .308 Win (7.62×51) is used for sporting and hunting shooting through bolt-action and semi-automatic rifles and carbines. The cartridge keeps its qualities under various climatic and weather conditions independent of the season and at a temperature from – 20 to + 50 C. 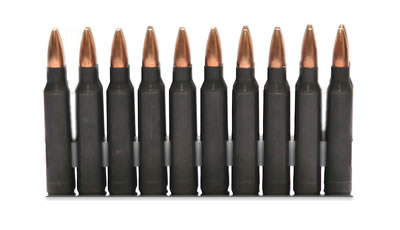 I think Matt had a bad rifle. I ran 60 round through mine and Im ordering more now. It works great!

I just bought a Savage TH 11 XP, .308 and put 120 rounds of this Tula ammo through it on the 1st day. Ammo and rifle worked flawlessly. 3 inch pattern at 100 yards all day long. Nothing wrong with the ammo, ejected just fine, maybe leaves residue a bit more than higher quality ammo, but not a problem to clean it up. I put this ammo through all my guns and have been happy with it!

I can hit dime sized groups all day long with this ammo in my AR-10. Zero malfunctions. Will buy again for sure!!

I had OK luck with steel cased ammo in my 9mm in the past so I decided to try this TULAMMO .308 man was it a mistake. I'm not sure if it was the ammo, or my Savage Axis II XP which was brand new and not yet broke in. I have had 6 rounds in the first 100 or so that refuse to eject bolt action where I physically have to beat on the bolt to get it to eject. Unfortunately I bought maybe 10 boxes of this ammo and it's trash. My gun is actually in my gun safe with a spent casing in the chamber I can't get out right now. Again I can't be sure if it was the gun or the ammo but I won't be buying either again! I would give it zero stars if I could.